Translation as Invitation: a workshop & reading

Followed by a student reading, and a reading by Isabelle Garron & her translators: Eléna Rivera, Body Was (Litmus Press, 2021) and Sarah Riggs, Face Before Against (Litmus Press, 2008), from 3:30-5 pm EST

The reading portion of this event will livestream starting at 3:30 pm EST. Register on Eventbrite for the in-person workshop + reading, or the livestreamed reading only: 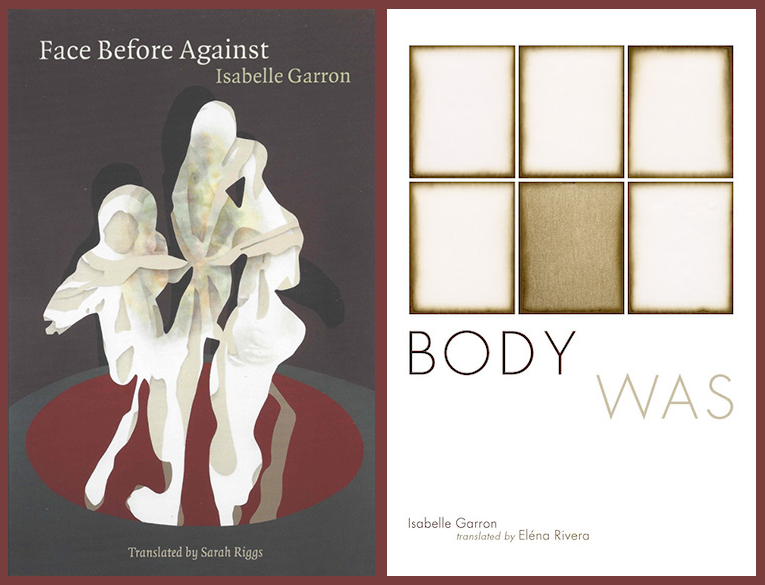 Isabelle Garron (b. 1968) is an associate professor in information and communication sciences at Telecom Paris – IpParis. Following a PhD in text and document sciences, she reissued Pierre Reverdy’s Lucarne Ovale (ThTy, 2001). She is the author of several books published by Flammarion: a trilogy composed of Face devant Contre (2002), Qu’il faille (2007, CNL encouragement grant) and Corps fut (2011), as well as Bras Vif (2018). She has collaborated on several anthologies as well as various magazines and collective events in France and abroad. From 2004 to 2012, she was a member of Action poétique and participated from 2005 to 2009 in Peinture Fraiche, a radiophonic program by Jean Daive on France Culture. To date, she has published only one prose piece, “Ensemble vide,” in the collection Surveillances (Publie.net, 2016), edited by Céline Curiol and Philippe Aigrain. With Yves di Manno, she co-edited Un Nouveau Monde: poésies en France 1960-2010 (Flammarion, 2017), which received a prize from the Académie Française. In addition, she wrote the afterword for Cinq le Chœur (Flammarion, 2014), a volume of the complete works of Anne-Marie Albiach. With E. Tracy Grinnell, she translated Leslie Scalapino’s way (Éditions Corti, 2020). Two of her books have been translated and published by Litmus Press: Face Before Against (translated by Sarah Riggs, 2008) and Body Was (translated by Eléna Rivera, 2021).

Eléna Rivera is a poet and translator who was born in Mexico City and spent her formative years in Paris. She won the 2010 Robert Fagles prize for her translation of Bernard Noël’s The Rest of the Voyage (Graywolf Press, 2011) and is a recipient of a 2010 National Endowment for the Arts Literature Fellowship in Translation. She has also translated four of Isabelle Baladine Howald’s books, the most recent being Phantomb (Black Square Editions, 2021), and two chapbooks by Sandra Moussempès (above/ground press, 2017 & 2021). Eléna’s latest books of poetry are Epic Series (Shearsman, 2021) and Scaffolding (Princeton University Press, 2017). She has also received fellowships from the Djerassi Foundation, the Witter Bynner Poetry Translator Residency at the Santa Fe Art Institute, and the MacDowell Colony.

Sarah Riggs is a writer, artist, filmmaker, and translator. She has published poetry books, most recently EAVESdrop with Chax (2020) and The Nerve Epistle with Roof Books (2021), as well as with 1913 Press, Burning Deck, Reality Street, Ugly Duckling Presse, Éditions de l’attente, and Le Bleu du Ciel, and forthcoming with Les Poèmes du Monde, as well as chapbooks with Belladonna and Contrat Maint, and critical essays with Routledge. She is the translator of Etel Adnan’s Time from the French with Nightboat (2019), which received the Griffin International Poetry and Best Translated Book Awards, as well as Face Before Against by Isabelle Garron with Litmus Press (2008), and books by Oscarine Bosquet, Ryoko Sekiguchi and others. She is the director with Omar Berrada of Tamaas / Earth Arts Justice, and is currently working on a series called “Invitation to the Species” on SoundCloud and in film, working especially with poets, dancers and activists. Tamaas is collaborating with Litmus on the publication of the Tamaas Translation Seminar, which is in its 15th year.