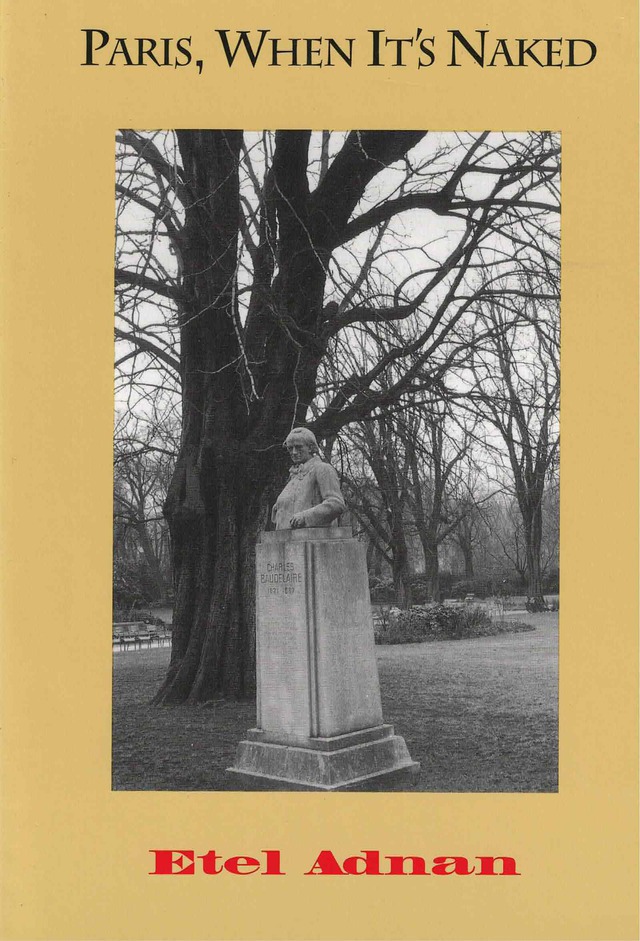 This extraordinary novel on the Civil War in Lebanon won the France-Pays Arabes award in Paris and has been translated into six languages. Sitt Marie Rose is part of Comparative Literature, World Literature, Women’s Studies and Middle East Studies curricula at more than thirty universities and colleges in the U.S. The story is about a handful of characters and how their relationships are affected by the war… the real protagonist is the city itself. Since the story is narrated in a staccato style, the text takes on a quality reminiscent of Picasso’s Guernica.

… Etel Adnan tells a story of our time, a time when simply to sit and think is to be baffled by a thousand shifting currents of social and political (and therefore personal) possibilities. Beneath the daily round of the individual, and the habituations of Paris as a locale, move forces (market, military, demographic) that threaten to subvert and destroy, promise to challenge and enlighten. This conflict is made naked here, thanks to Adnan’s wonderful ability to level with herself and her readers. The light of the personal becomes all the brighter, among such giant shadows.

Of Cities & Women (Letters to Fawwaz)

Written against the background of war at the turn of the century, this millennium — the Gulf War, the Lebanese Civil War and the military occupations of that country, the author’s country of origin — these letters, Of Cities and Women, are in their turn now letters to cities and women — that we, that is, women and men alike, might eventually, before it is too late, ‘find the right geography for our revelations.’

Ammiel Alcalay reviews Paris, When It’s Naked and Of Cities and Women (Letters to Fawwaz), originally published @ The Nation

Etel Adnan was born in Beirut, Lebanon in 1925. Her work as a whole is a faithful record of the times and places she has lived in Beirut, Paris, and in the San Francisco Bay Area. At least eighteen works by Adnan have been published in English. They include Sitt Marie Rose (Post-Apollo Press, 1982); The Arab Apocalypse (Post-Apollo Press, 1989); Sea and Fog (Nightboat Books, 2012), winner of the Lambda Literary Award for Lesbian Poetry and the California Book Award for Poetry; Premonition (Kelsey Street Press, 2014); Surge (Nightboat Books, 2018); and Time (Nightboat Books, 2019), winner of the Griffin Poetry Prize and the Best Translated Book Award. Nightboat Books published the 2-volume set, To look at the sea is to become what one is: An Etel Adnan Reader, in 2014. Also in that year, Adnan was named a Chevalier des Arts et des Lettres, France’s highest cultural honor, by the French Government. Her paintings, described by New York Times art critic Roberta Smith as “stubbornly radiant abstractions,” have been widely exhibited. Spanning media and genres, Adnan’s writings have led to numerous collaborations with artists and musicians, including the French part of CIVIL WarS, a multi-language opera by American stage director Robert Wilson, performed in Lyon and Bobigny in 1985.