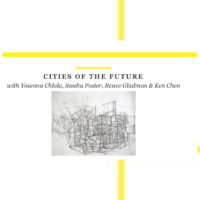 Three experimental writers of color investigate the vision of the city through books that merge visual art with poetry and prose.

Sesshu Foster’s eagerly anticipated City of the Future rebels against the gentrification of Chicano/Asian East LA through poems, letters, drawings, and postcards: Douglas Kearney calls it “elegiac, documentarian, furious and fun as hell”!

A visual artist exhibited at Performa, ArtDubai, and Art In General, Youmna Chlala imagines language as the vehicle that records memory—the recollections of love, loss and longing that traverse cities and the migration from Beirut—in her new poetry collection The Paper Camera.

In the Ravicka novels by Renee Gladman, a linguist-traveler explores the invented city-state of Ravicka, a Wittgensteinian urban landscape with its own gestural language, poetic architecture, and inexplicable physics.