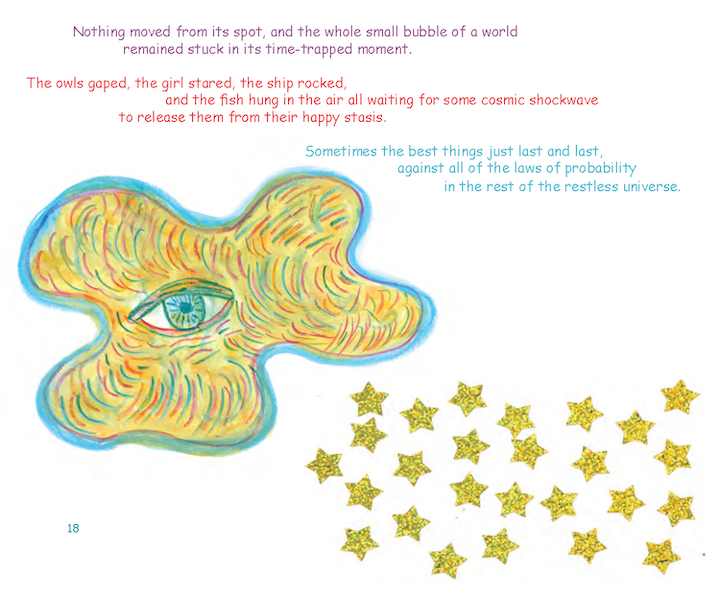 In this interview at BOMB Magazine, Susan Bee and Johanna Drucker discuss their most recent collaboration, Off-World Fairy Tales (Litmus Press, 2020), fantasy as a mode of political resistance, feminism and play, science fiction and poetry, friendship, and more:

Johanna Drucker: In our other collaborations, the concept for the book framed the development of the texts and images. But when I first saw the images in your studio that prompted this collaboration, I wasn’t sure if you had a specific project in mind for them. Did you?

Susan Bee: No, I didn’t have anything in mind at all; I was making some drawings in the studio for my own amusement. The drawings are an escape hatch from the oil paintings that I do at the other end of my studio. They are whimsical and spontaneous and are done with watercolor, ink, crayon, colored pencil, and gouache; and I use collage including stickers and images from my trips to China, Sri Lanka, Europe, and India. You saw them, and I sent a few to you, and that inspired some of the first stories that you wrote. It was followed by an unusual period of in-person visits because then you were at the Beinecke Rare Book & Manuscript Library at Yale, and we were able to be together in Brooklyn.

JD: People ask us about who the audience is for this book, which is also a way of asking about its genre: children’s book, graphic work for adults, hybrid. What is your thought on this, and whose work feels like an influence?

SB: This book is a poetic work of imagination in the footsteps of Lewis Carroll, Florine Stettheimer, Leonora Carrington, Sonia Delaunay, Antoine de Saint-Exupéry, William Blake, and Edward Lear. It is a lighthearted travelogue through a fairly benign universe rather than a dark vision of the future. It isn’t necessarily for children, but the images and writing are on the cusp of adulthood, when the imagination was a guiding life force. I like to think of these works as dreamlike and poetic. There is recognizable imagery such as dogs, cats, frogs, people; but they are placed in an exotic, colorful landscape that embraces and transforms them. When I was working on this imagery, I would read each story and then highlight certain images that I wanted to include in the drawing. So there is a direct reflection of the written sources in the collaged drawings. But this is not a one-on-one illustration. While the stories and the images can stand on their own, the combination strengthens and expands them. This is the key difference between this more collaborative approach and conventional illustration.

How would you describe the style of the writing beyond playful? What is our relation to fairy tales in the computer and internet age?

JD: I have a long-standing interest in sci-fi language and concepts. They seem to open possibilities for knowledge and experience to pass beyond the already-familiar. Imagination takes many forms, but when I think about the artists and authors you reference, all favorites of mine too, I think their “other” to the world was dreams, cosmology, metaphor, whimsy, illogical-logic—all forms of play in the serious sense of invention. They saw the “within” and “beyond” of ordinary frameworks of experience in visionary creative terms. For me, sci-fi images and language provide the idiom of our time for these possible re-imaginings of space, time, human identity, and encounters with other forms of life and consciousness. What would William Blake’s Jerusalem look like if he imagined it in 2020? Or Alice’s Wonderland? They might look like the Off-World of our pages!