There: In the Light and the Darkness of the Self and of the Other

There: In the Light and the Darkness of the Self and of the Other is a prose poem that becomes a long and poignant interrogation. In it Adnan asks whether or not there is an other out there, or if it is all a matter of being alone in the world. And, to what degree can we know the other and what exactly do we know? There also investigates the conflicts that arise “as soon as we are two.” “A conversation,” she writes, “is the beginning of civilizations.”

There is a philosophical inquiry into the borders and boundaries that shape modern life unevenly across the globe: sad binaries of self and other, male and female, wealthy and starving, nation and enemy, “Here” and “There.”

[T]he poems are really a meditation on “conflict,” particularly [for] us—the Arab East—who live in a conflict since World War I, a whole century of conflict, a century of resistance. It is exhausting. We are exhausted, we lost a whole century. But we are still building, in spite of our good or bad (Arab) governments, the people are courageous.

There is a prose poem which becomes a long and poignant interrogation. Etel Adnan is asking whether or not there is an other out there, or if it is all a matter of being alone in the world. To what a degree can we know the other and what exactly do we know? There investigates also the idea of conflict, between individuals or countries. Are we doomed to have conflicts as soon as we are two? A conversation, she says “is the beginning of civilization.” I woke up this morning realizing that Etel has presented us with “A Geology of the Spirit.”

There is a poem of hidden seams, fissures that we cross unsuspecting. A smooth surface conceals a universe of sudden shifts and transitions from one level to another—a philosophical level which pursues the mysteries of consciousness and place, a second level which asks the same questions (“do I have to have a nationality in order to be human?”) in a committed social and political vision, a passionate and engaged post-modernism.

Etel Adnan’s There pursues questions that are at once ancient and modern, united in their urgency and difficulty. The “there” and “here” of Adnan’s thought seek to engage the absences and presences of history and its processes, from the personal to the global and back again. Her interrogations and self-interrogations stretch from the Middle East to Europe to the Americas, some of the sites from which she considers what it means that “they’re eating dry bread, over there,” while “over here they’re starving amidst opulence.” This is a query that can be understood, Adnan implies, only amidst kindred speculations about power, and about naming and knowing—all posed in the vocabulary of philosophical paradox: “Could rivers be named after their disappearance?” In its investigations of the ways in which such apparent oppositions as self and other, “metropolis” and “periphery,” are constructed, understood and, often, violently maintained, There asks that we turn with renewed attention to some of the most important matters before us.

There intends—activating intention through direct address—a planetary community that thinks its social, political, and cultural experiences post-Eurocentrically and seeks to develop modes of thinking that could dismantle the international political structures shaped by imperialist history in order to allow new structures to take their place. 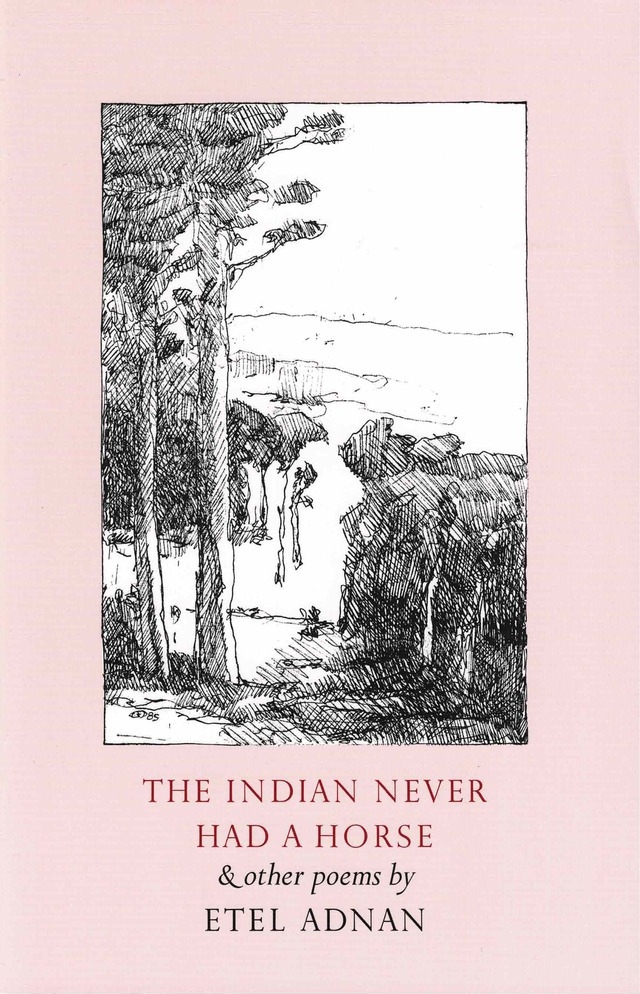