From A to Z: Collective Reading & generative Writing Workshop

Join us for a collective reading of Etel Adnan’s From A to Z: the digital-critical edition available on CUNY Manifold. The reading will be followed by a series of generative writing prompts presented by the editors.

Etel Adnan’s From A to Z is a long poem cataloging everyday life in New York City during the Three Mile Island nuclear accident in Philadelphia in 1979. The first book published by The Post-Apollo Press, From A to Z offers multiple entrance points into the work of Etel Adnan and Simone Fattal, founder of the press.

This new digital-critical edition of From A to Z is made with teachers, students and scholars in mind and includes an e-book, archival and contextual resources curated by Sahar Khraibani, Alisha Mascarenhas, Lindsey Boldt and a.Monti.

In this workshop the readers will offer a series of invitations in response to the edition.

This event is part of Open Poetics Series 1, a collaboration between Litmus Press and CUNY, providing critical editions of out-of-print poetry for free, along with multimedia tools that illuminate their context. The platform is accessible to students, scholars, teachers and anyone interested in digital teaching tools.

Join us by registering on here. 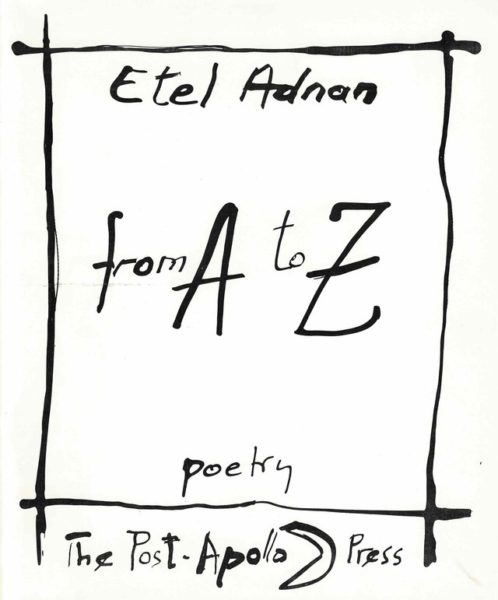 Etel Adnan was born in Beirut, Lebanon in 1925. She was a celebrated writer, essayist, and playwright, and is the author of more than twenty books in all these disciplines. Her work as a whole is a faithful record of the times and places she has lived in Beirut, Paris, and in the San Francisco Bay Area. At least eighteen works by Adnan have been published in English. They include Sitt Marie Rose (Post-Apollo Press, 1982); The Arab Apocalypse (Post-Apollo Press, 1989); Sea and Fog (Nightboat Books, 2012), winner of the Lambda Literary Award for Lesbian Poetry and the California Book Award for Poetry; Premonition (Kelsey Street Press, 2014); Surge (Nightboat Books, 2018); Time (Nightboat Books, 2019), winner of the Griffin Poetry Prize and the Best Translated Book Award; and most recently Shifting the Silence (Nightboat Books, 2020). Her paintings, described by New York Times art critic Roberta Smith as “stubbornly radiant abstractions,” have been widely exhibited. Spanning media and genres, Adnan’s writings have led to numerous collaborations with artists and musicians, including the French part of CIVIL warS, a multi-language opera by American stage director Robert Wilson, performed in Lyon and Bobigny in 1985. In 2014 she was named Chevalier des Arts et des Lettres, France’s highest cultural honor, by the French Government.

Lindsey Boldt is a poet, songwriter, playwright, and devotee of all things impromptu and playful, particularly Poets Theater. She is the author of the poetry collection, Weirding, from Dogpark Collective, the novella, Overboard, from Publication Studio, and several chapbooks including Titties for Lindsey and There Are No Cops in America and the Streets are Paved w/ Cheese. She works as editorial director of Nightboat Books and lives in Olympia, Washington on Squaxin and Nisqually land.

Hazem Fahmy is a writer and critic from Cairo. A PhD student in Middle Eastern Studies at Columbia University, he runs the literary newsletter wust el-balad, on Substack. His debut chapbook, Red//Jild//Prayer won the 2017 Diode Editions Contest, and his second, Waiting for Frank Ocean in Cairo was published in 2022 by Half-Mystic Press. A Kundiman and Watering Hole Fellow, his writing has appeared, or is forthcoming in The Best American Poetry 2020, The Boston Review, Prairie Schooner, Mubi Notebook, Reverse Shot, and Mizna. His performances have been featured on Button Poetry and Write About Now.

Sahar Khraibani is a writer, editor, and educator based in NYC. She is interested in the intersection between language and visual production. Her writing and work have appeared in the Brooklyn Rail, Hyperallergic, TERSE Journal, Degree Critical, The Outpost, Queen Mobs, Full Stop, Durian Days and Bidayat Mag, among others. She currently serves as faculty at Pratt Institute.

Alisha Mascarenhas is a poet, teacher and literary translator, and the author, most recently, of Contagion Fields, with the Belladonna* 2021 chaplet series. Alisha is co-editor of READ: A Journal of Inter-Translation, and lives in Brooklyn, NY.

a.Monti is a trans-disciplinary poet and translator based between Berlin + Brooklyn. Projects alternate between text, sound, performance and collaboration. Monti’s poetry collection Mycelial Person (Vegetarian Alcoholic Press, 2021) has been adapted for radio as SporeRadical at Montez Press Radio.

E. Tracy Grinnell is the author of Hell Figures (Nightboat Books, 2016), portrait of a lesser subject (Elis Press, 2015), Helen: A Fugue (Belladonna Elder Series #1, 2008), Some Clear Souvenir (O Books, 2006), and music or forgetting (O Books, 2001), as well as the limited edition chapbooks Mirrorly, A Window (flynpyntar press, 2009), Leukadia (Trafficker Press, 2008), Hell and Lower Evil (Lyre Lyre Pants on Fire, 2008), Humoresque (Blood Pudding/Dusie #3, 2008), Of the Frame (Portable Press at Yo-Yo Labs, 2004), and Harmonics (Melodeon Poetry Systems, 2000). Grinnell’s poetry has been translated into French, Serbian, Polish, and Portuguese. She has taught creative writing at Pratt Institute, Brown University, and in the Summer Writing Program at Naropa University. She lives in Brooklyn, New York and is the founding editor and director of Litmus Press. 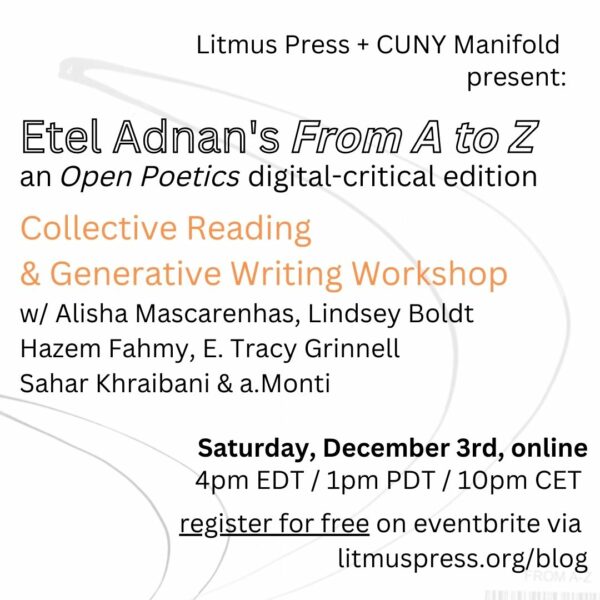