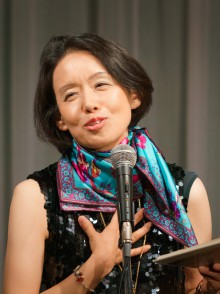 Takako Arai was born in 1966 in Kiryu City, Gunma Prefecture to a family involved in textile manufacturing, a major industry in Kiryu. Her first book, Hao Bekki, was published in 1997, and her newest collection of poetry, entitled Tamashi Dance, was published in 2007 and awarded the 41st Oguma Hideo Prize. She was a founding editor of the journal Shimensoka between 1992 and 1995, and since 1998 she has been a contributor to, and eventually editor of Mi’Te, a monthly publication featuring poetry and criticism. Arai has also been a contributor to several publications focusing on folklore and customs, as well as a series of writings on the poet Sakutaro Hagiwara, and the butoh dancer, Kazuo Ohno. Arai currently teaches Japanese language to foreign students studying at the Center for International Exchange at Saitama University.